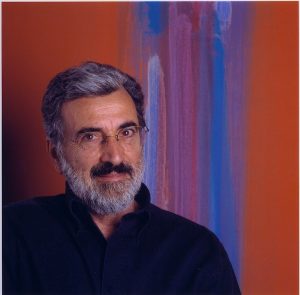 Italian artist Vittorio Matino (b. 1943) has emerged over the years as a leading figure in the world of abstract art, putting color, understood as pure luminous energy, as the central element of his poetics. His brilliant use of color is informed by his investigations of light and color while living in Veneto region of Italy in the 1960s.

After setting in Milan in 1971 and spending long periods in Paris, he travelled throughout Europe, perfecting his study of painters in the modern tradition. In 1975, on a trip to the United States, he gained a deeper knowledge of the masters of the New York School and the Color-Field Abstraction. A long stay in New York in 1989 was decisive in steering his painting on a new course. His exhibition at P. A. C. (‘Padiglione d’Arte Contemporanea’) in Milan in February 1990 covered all the various stages of his journey as an artist since 1986. In 1995, with Piero Dorazio, he relaunched the Art Club, which was originally created in the post-war period. In 1996, as part of the international ‘Arte –Metro – Roma’ project, he produced a 14-meter long mosaic , (551 1/4 x 78 3/4 inches), for Bologna subway station.

Vittorio Matino developed a vocabulary that reflected the transparent colors of the Venetian School but the discovery of foreign cultures has been a pressing necessity and has helped liberate him from the weight of Italy’s long and rich artistic tradition. The thrust—and the challenge—of Matino’s practice is the dissolution of cultural boundaries. He has traveled extensively, studying Asian and African art and deepening his connection to American Action Painting and Color Field Abstraction. His formal investigations, though firmly rooted in the Italian Color Field School, are also informed by aspects of Eastern philosophy and by a long fascination with the color traditions of the Indian Subcontinent.

His work is in the collections of major Italian museums and corporations, including Museo del Novecento, Intesa Sanpaolo Galleria d’Italia, the Prada Foundation and the Edison Corporation, Milan; and the Enimont Corporation, New York. Several books about his work have also been published.

He lives and works in Milan and Nice.